Building on my earlier work with basketball box scores, here is a new project: Minor League box scores for some of the greatest major league baseball players of all time.

What does “partially proofed” mean? Each box score has been analyzed to look for inconsistencies within that box score (such as a player with more hits than at-bats, an incomplete batting order, a missing defensive position player, or a pitcher with more runs allowed than the other team scored). However, there are still some inconsistencies between the cumulative season statistics and the season stats listed on baseball-reference and other sources. In particular, Gehrig’s home run total in 1923 was reported as 23 in the Hartford Courant (and these box scores), but 24 in The Sporting News and other sources.

The scripts used to enter the box score data and create the game logs and statistics files are available on GitHub: https://github.com/mhamel12/boxtopbaseball 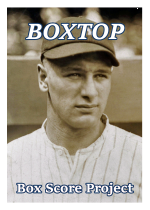 Lou Gehrig originally joined the Senators in June 1921 prior to his freshman year at Columbia University. Gehrig was listed as “Lou Lewis” in box scores in the Hartford Courant, Berkshire Eagle, and Springfield Republican to try to obscure his identity, but after 12 games the scheme was uncovered; Gehrig left the Senators and was stripped of his freshman year of college eligibility. After the 1923 college baseball season, Gehrig left Columbia and signed with the Yankees, playing seven games in the majors before rejoining the Senators in August. Gehrig remained with the Senators for the rest of their 1923 season (briefly returning to New York in late September) and most of 1924, until he was recalled by the Yankees on August 31, 1924.